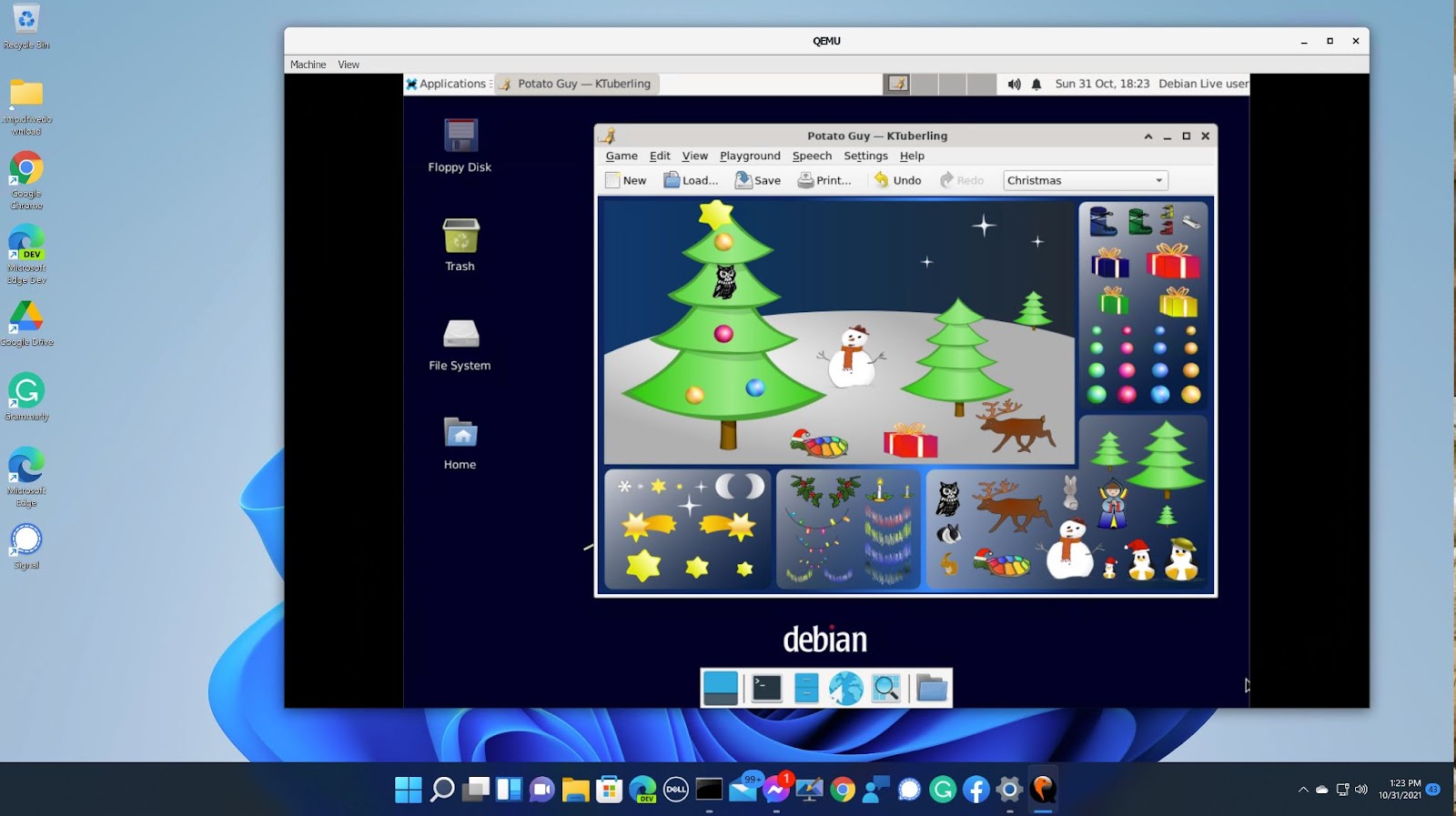 Answering the most common concern about open source software, this article shows that, yes, Linux will run under Windows.

So why should you read this article? Why, indeed, should I write it? My motive is to help remove two obstacles to the wider adoption of free and open source software.

Most computer users are familiar with a Microsoft Windows environment and the variety of screensavers available to prevent unauthorized access to the data on the computer when unattended. The good news is that there is plenty of free and open source software available nowadays to enable Linux to install and run as a Windows screensaver. This article shows you how to construct an appropriate package, and in doing so, demonstrates that the “free” and “non-free” sides of the software Grand Canyon are not so far apart after all.

Running Linux under Windows as a Screensaver App

But which Linux? Without knowing what a client intends to do, it would be irresponsible to make a blanket recommendation. However, on December 25, 2021, the demand for games will be great, and the delivery capability will be sufficient. And if you configure it as a screensaver, even the possibility of pressing the wrong key to start it is eliminated.

Getting the ISO to run under another operating system requires an open source PC emulator, including an open source BIOS and an open source virtual graphics adapter (such as QEMU version 6.1.0). The emulator enables you to set up a virtual PC within a real one. To construct a screensaver, the best way is to configure it with a virtual DVD drive, keyboard, screen, and mouse, but without any virtual disks. This all runs using the magic of software emulation, but modern PC hardware is sufficiently fast for the task (which we originally designed in 2005). Some corporate environments would require the virtual PC not to have a network adapter — you can run Firefox in the screensavers here. This package has a network adapter, but it is simple to change this if required since all source code is supplied.

Here are the steps to make this work.

You can build QEMU from source available here https://www.qemu.org/download/ , but there is a suitable prebuilt QEMU for Windows available at https://qemu.weilnetz.de/ . This example was built and tested with QEMU 6.1.0 .

It is necessary to write a small stub program to go into the C:\WINDOWS\SYSTEM32 directory as an SCR file, which runs QEMU with appropriate parameters. https://github.com/tjcw/screensavers/blob/master/packaging/crunqemu-usb.c is sufficient for this; it runs QEMU with 1024 MB of memory, one processor, and the mouse connected as if it were a USB tablet.

This stub can be built with mingw64, from the Cygwin open source package, or presumably (though untested) with a commercial Windows C compiler.

Disabling the network adapter in the virtual PC can be done with parameter “-nic none” on the QEMU command line.

Inno Setup is an open-source packaging/installation tool for Windows available here https://jrsoftware.org/isinfo.php . I used version 6.0 for this example. Packaging with Inno Setup results in a warning from Microsoft Defender when installing the screensaver; this warning can be overridden with 2 mouse clicks. A future version of this blog will explain how to package with Microsoft-licenced (non-open-source) tooling to eliminate this warning.

The screensavers are available here on this torrent feed:

You will need a torrent client, such as Transmission, to download it. It is especially important to check the sha256sum values as this channel is not under the control of Linux Foundation.

After downloading, you should check the ‘sha256sum’ of the files. This validates that you have indeed got the files the author intends. For Windows there is a no-charge ‘Hash Tool’ in the Microsoft app store which will do the job; for Linux you use the command line.

Extract the two zip files using the built-in Windows extract feature, and run the installer .exe files. Then go to the Windows screensaver selection screen and select either ‘fr2’ or ‘gk2’ as appropriate.

There will be a 4-minute hiatus in the middle of startup while the X server initializes — be patient.

The source code for all components is available on the public Internet, and these links will lead you to it.

The screensavers can be uninstalled with the standard Windows uninstall tool.

The following file structure is used for the live DVD filesystem:

The ISO is bootable, so it is also possible to write this to a USB key and boot your system from there. Rufus https://rufus.ie/en/ is a suitable open-source tool if you want to do this under Windows. You will need a USB key of 16GB or larger to try this option.

That’s really all it takes to install Linux from a zip file to run as a screensaver on a Windows machine.

The screensaver could usefully be enhanced to exploit hardware virtualization acceleration. This is done with HAXM on an Intel processor or WHPX on an AMD processor. It requires changing a BIOS setting and some configuration in the internals of Windows, so it is not currently suitable for use in a simple screensaver application.

As Linux and Windows march forward, it may be necessary to rebuild the screensaver package from time to time, mainly to pick up new certificates for web browsing.

Software Bill of Materials (SBOM) for the Live DVD

In furthering the desire to improve education around open source software and increase awareness of how to minimize security vulnerabilities and exposure in the software supply chain, we wanted to update this article with a short tutorial on generating a Software Bill of Materials (SBOM) using the SPDX toolset.

This is how it is done.

The first is the script that needs to be injected into the screensaver build process:

This results in 5 files that need to be fed to the SPDX/SBOM tool. This script is in place in the ‘screensavers’ repository above and results in the files being placed in /tmp in the screensaver, also available as chroot/tmp on the screensaver build system.

Then it is a simple matter to run the SPDX/SBOM tool, and the ISO standards dependency list is generated. Multiculturalism in technology and its limits: AsyncAPI and the long road to open source utopia