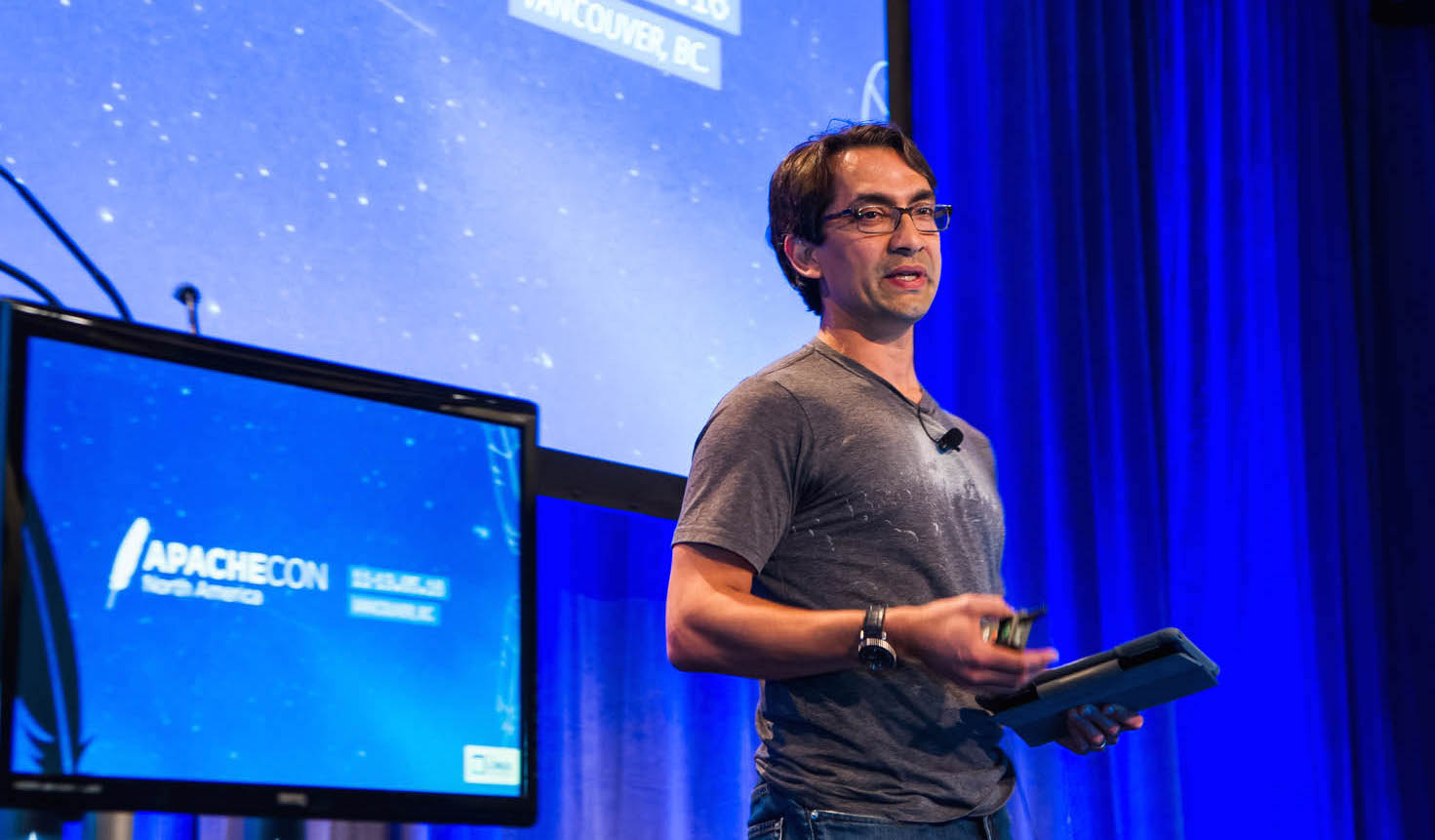 It’s been two years since The Linux Foundation forged a partnership with the Apache Software Foundation to become the producer of their official ASF events. This year, ApacheCon and Apache Big Data continued to grow and gain momentum as the place to share knowledge, ideas, best practices and creativity with the rest of the Apache open source community.

As 2016 draws to a close, we looked back at some of the highlights from ApacheCon and Apache Big Data and collected the 7 videos from our most-read articles about the events in 2016.

These videos help highlight the good work the open source community accomplished for and with Apache projects this year. We hope they inspire you to participate in the community and present your work again at ApacheCon and Apache Big Data, May 16-18, 2017 in Miami. The deadline to submit proposals is February 11!

1. IBM’s Wager on Open Source Is Still Paying Off

When IBM got involved with the Linux open source project in 1998, they were betting that giving their code and time to the community would be a worthwhile investment. Now, 18 years later, IBM is more involved than ever, with more than 62,000 employees trained and expected to contribute to open source projects, according to Todd Moore, Vice President of Open Technology at IBM, speaking at ApacheCon in Vancouver in May.

“It became apparent that open source could be the de facto standards we needed to be the engine to go out and drive things,” Moore said in his keynote. “[The contributions] were bets; we didn’t know how this was going to come out, and we didn’t know if open source would grow, we knew there would be roadblocks and things we’d have to overcome along the way, but it had promise. We thought this would be the way of the future.”

Read our coverage of Moore’s presentation, and watch the full video below.

As open source software matures and is used by more and more major corporations, it is becoming clear that the enterprise software game has changed. Sam Ramji, CEO of the Cloud Foundry Foundation, believes that open source software is a positive sum game, as reflected in his ApacheCon keynote.

Invoking his love of game theory, Ramji stated emphatically that open source software is a positive-sum game, where the more contributors there are to the common good, the more good there is for everyone. This idea is the opposite of a zero-sum game, where if someone benefits or wins, then another person must suffer, or lose.

Read the full coverage and watch the video below.

3. Apache Milagro: A New Security System for the Future of the Web

With 25 billion new devices set to hit the Internet by 2025, the need for a better worldwide cryptosystem for securing information is paramount. That’s why the Apache Milagro project is currently incubating at the Apache Software Foundation. It’s a collaboration between MIRACL and Nippon Telegram and Telegraph (NTT), and Brian Spector, MIRACL CEO and Co-Founder, discussed the project in his keynote at ApacheCon in May.

Spector said the project was born in a bar on the back of a napkin after a brainstorm about how one would rebuild Internet security from the ground up. That sounds like a lot of work, but Spector believes it’s absolutely necessary: the future of the Web is going to be very different from the past.

Read the full article and watch the video below.

“We measured, we learned, we innovated, and we grew.”

Brian Sullivan, Director of Streaming Data Engineering & Analytics at Netflix, recited this recipe for the streaming video giant’s success several times during his keynote address at the Apache Big Data conference in Vancouver today. It was this mantra, combined with an open source toolkit, that took the stand-alone streaming product from a tiny test launch in Canada to making Netflix a global presence.

Read a summary of the presentation and watch the video, below.

It only makes sense that as the community of Spark contributors got bigger the project would get even more ambitious.  Spark 2.0 came out with three robust new features, according to Ion Stoica, the founder of Databricks.

“Spark 2.0 is about taking what has worked and what we have learned from the users and making it even better,” Stoica said.

Read our coverage of the keynote and watch the full presentation, below.

IBM is invested in Spark’s machine-learning capabilities and is contributing back to the project with its work on SystemML, which helps create iterative machine-learning algorithms. The company offers Spark-as-a-service in the cloud, and it’s building it into the next iteration of the Watson analytics platform. Basically anywhere it can, IBM is harnessing the efficient power of Apache Spark.

“We at IBM … have noted the power of Spark, and the other big data technologies that are coming in [from the Apache Software Foundation],” said Luciano Resende, an architect at IBM’s Spark Technology Center.

Read the full article and watch the presentation, below.

eBay’s ecommerce platform creates a huge amount of data. It has more than 800 million active listings, with 8.8 million new listings each week. There are 162 million active buyers, and 25 million sellers.

“The data is the most important asset that we have,” said Seshu Adunuthula, eBay’s head of analytics infrastructure, during a keynote at Apache Big Data in Vancouver in May. “We don’t have inventory like other ecommerce platforms, what we’re doing is connecting buyers and sellers, and data plays an integral role into how we go about doing this.”

About five years ago, eBay made the conscious choice to go all-in with open source software to build its big data platform and to contribute back to the projects as the platform took shape.

Read the full article about eBay and watch the presentation, below.

Share your knowledge and best practices on the technologies and projects driving the future of open source. Submit a speaking proposal for ApacheCon and Apache Big Data today!

Not interested in speaking but want to attend? Linux.com readers can register now for ApacheCon or Apache: Big Data with the discount code, LINUXRD5, for 5% off the registration price.