In programming, a library is an assortment of pre-compiled pieces of code that can be reused in a program. Libraries simplify life for programmers, in that they provide reusable functions, routines, classes, data structures and so on (written by a another programmer), which they can use in their programs.

For instance, if you are building an application that needs to perform math operations, you don’t have to create a new math function for that, you can simply use existing functions in libraries for that programming language. 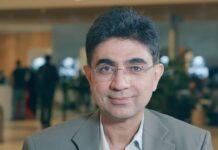