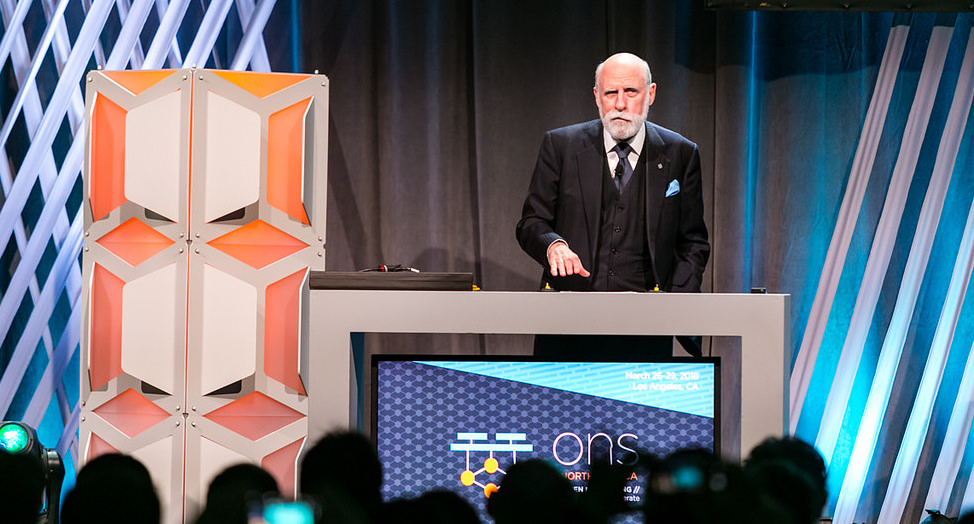 The secret behind Internet protocol is that it has no idea what it’s carrying – it just a bag of bits going from point A to point B. So said Vint Cerf, vice president and chief internet evangelist at Google, speaking at the recent Open Networking Summit.

Cerf, who is generally acknowledged as a “Father of the Internet” said that one of the objectives of this project, which was turned on in 1983, was to explore the implications of open networking, including “open source, open standards and the process for which the standards were developed, open protocol architectures, which allowed for new protocols to be invented and inserted into this layered architecture.” This was important, he said, because people who wanted to do new things with the network were not constrained to its original design but could add functionality.

When he and Bob Kahn (co-creator for the TCP/IP protocol) were doing the original design, Cerf said, they hoped that this approach would lead to a kind of organic growth of the Internet, which is exactly what has been seen.

They also envisioned another kind of openness, that of open access to the resources of the network, where people were free both to access information or services and to inject their own information into the system. Cerf said they hoped that, by lowering the barriers to access this technology, they would open the floodgates for the sharing of content, and, again, that is exactly what happened.

There is, however, a side effect of reducing these barriers, which, Cerf said, we are living through today, which includes the proliferation of fake news, malware, and other malicious content. It has also created a set of interesting socioeconomic problems, one of which is dealing with content in a way that allows you decide which content to accept and which to reject, Cerf said. “This practice is called critical thinking, and we don’t do enough of it. It’s hard work, and it’s the price we pay for the open environment that we have collectively created.”