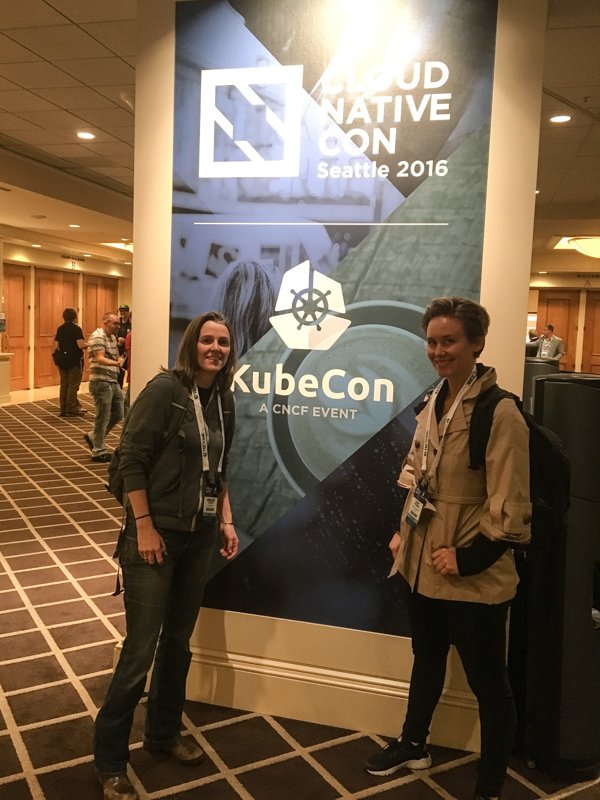 All registered for #Kubecon with @DeirdreStorck – ready to learn! #CloudNativeCon

In her opening keynote speech at CloudNativeCon/KubeCon 2016 in Seattle, WA, Chen Goldberg stated Kubernetes was more than open source it was an “open community.” As someone who is both new to the community and to the industry, I was happy to see the truth in this statement expressed throughout the entire conference.

I came to the tech industry by way of my earlier career as a motorcycle stunt woman, and leading up to the conference I was wondering if I would feel welcome and able to contribute as a junior developer with an unorthodox background. I was quickly put at ease by Chen’s comments, Dan Kohn’s opening keynote discussing the CNCF’s dedication to diversity, and most of all, by the wonderful people I met.

My goals for the conference were to learn as much as possible about the technologies behind Cloud Native Computing, find a way to start contributing as a junior developer and meet some inspirational people. I was pleased all these goals were met and here are some highlights.

Dan and Piotr pointed out that anything you are doing with Kubectl on the command line, you can also do in the K8s Dashboard. I have been exclusively using Kubectl in the terminal for the past few months and could really see the benefit of additionally using the Dashboard to gain insight into my cluster’s state, performance and activity. As a visual learner, it’s great to have another way to wrap my head around what’s going on inside my Kubernetes cluster.

Officially, “Helm, is a tool that streamlines the creation, deployment and management of Kubernetes-native applications.” My description of Helm? A way to whip up pre-made recipes for components you might need in your Kubernetes cluster.  For instance if you need a WordPress deployment on a Kubernetes cluster you simply:

My favorite idea from this talk was how new users of Kubernetes can use Helm to learn about what components and configurations are needed in a Kubernetes cluster.

Find a Way to Contribute

Eduardo discussed Fluentd, a product I have been learning about, which “is an open source data collector for unified logging layer.” Treasure Data created a vibrant community around Fluentd with more than 600 user contributed plugins written in Ruby;  and Fluentd was announced as an official CNCF project the first day of the conference.

Eduardo took the time to personally discuss Fluentbit, a slimmer data forwarder and how we could use it in our project. He explained support to create Golang plugins had just been added and talked about how I could get involved by writing a plugin. Since I am also learning Golang and could use Fluentbit, the idea of writing a plugin seems like an excellent contribution that will allow me to continue my deep dive into managing data between containers.

On the second day of the conference the CNCF hosted a diversity luncheon. The discussion around the lunch tables focused on challenges facing diverse individuals entering the industry. I had the opportunity to speak with senior female developers with successful careers and hear their advice on entering and navigating the industry. It was a wonderful chance to focus on how we can continue attracting diverse talent who can build stronger and more relevant technology for everyone.

CloudNativeCon 2016 was a wonderful first conference for me and although the whirlwind of a conference is tiring, I left feeling motivated and inspired. The conference made me feel like I was a part of the community and technology I have been working with daily.

Leah Petersen (Twitter: @eccomi_leah) is currently an intern with the CNCT team at Samsung SDS, the newest Platinum Member of the Cloud Native Computing Foundation. She is finishing up a year long program at Ada Developers Academy, which is a training program located in Seattle for women who want to become software developers.