Hooking is a powerful programming technique for monitoring software behavior or extending functionality without altering the original code. The idea is to intercept certain events or system calls and use them to initiate your own custom code.

At Apriorit, we use hooking all the time when creating solutions for our clients, particularly in the areas of cybersecurity, data acquisition, and systems control. As part of our development efforts for Unix-like systems, we’ve created a custom solution for hooking based on the Linux splice technique (you can find decent description and splice Linux example here). We want to share it with you in this brief article.

Our custom hooking technique for Unix-like systems was inspired by the popular Mhook library, the source code for which can be found on GitHub. This library is powerful for hooking, but supports only Windows platforms and includes surplus modules that aren’t acceptable for *nix.

To implement hooking in Unix, we took ideas from Mhook and modified them, increasing the flexibility and functionality of our tool in the process.

The general splicing hooking algorithm for *nix kernel hooks can be described as follows:

Typically, we use the original function’s wrapping when replacing a function with a hook. But if an original call needs to be executed inside the hook or anywhere else, the algorithm’s approach should be modified to handle a larger buffer size.

This algorithm is visualized in Figure 1 for an x64 platform. 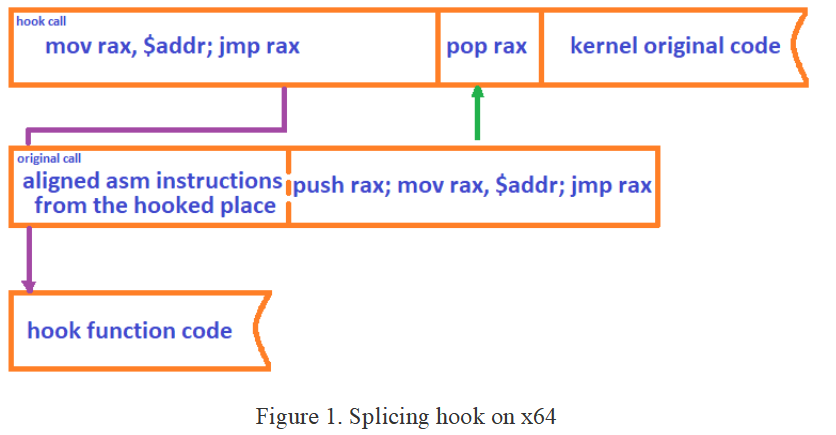 Advantages of this technique

Compared to existing solutions, this approach provides several advantages in terms of functionality:

Disadvantages of this technique

When we talk about disadvantages of this approach, we’re not talking about any flaws or limitations in terms of functionality, but rather about difficulties that arise in actual implementation. In this regard, there are two main disadvantages:

We actively use the Unix splice hooking approach described above in projects we create for our clients here at Apriorit, particularly in the area of cybersecurity. We’ve implemented this hook type for a variety of architectures and kernel versions, including x86_64, x86, and ARM in Linux 2.6.32 to 4.10.

We hope that you find this approach useful and that you’ll be able to use some of the ideas presented in this article for your own hooking needs.