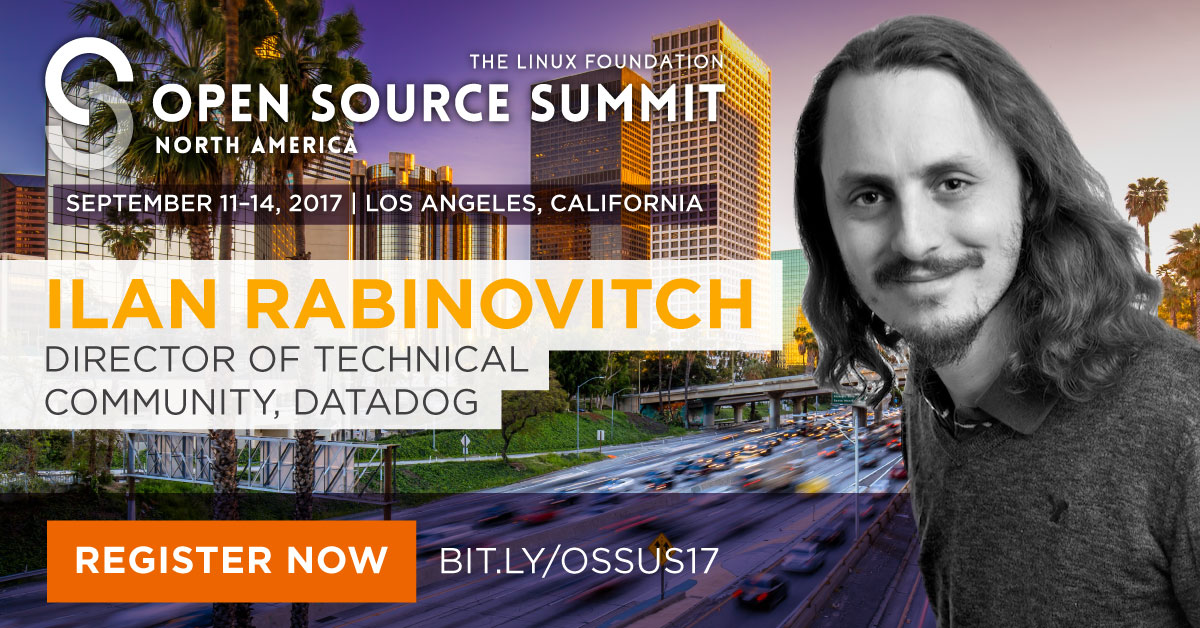 Ilan Rabinovitch, Director of Technical Community at Datadog, will be giving a talk at Open Source Summit NA titled “Docker Adoption Patterns” based on information gathered through Datadog’s research.

Rabinovitch has years of experience leading infrastructure and reliability engineering teams at companies such as Ooyala and Edmunds.com and is also a co-founder of open source community events such as SCALE, Texas Linux Fest, and DevOpsDay LA. Here, Rabinovitch shares all the reasons why you need to attend his talk.

Linux.com: How are containers affecting us in real life? What kind of companies should care about your talk?

Ilan Rabinovitch: Over the last decade, public cloud providers and virtualization have, through automation, reduced human and financial cost of provisioning or re-provisioning.  Once you could replace instances with an API call, it no longer makes sense to troubleshoot unhealthy hosts, when you can just replace them. Further autoscaling often meant that hosts might only be around long enough to handle a spike in load during peak traffic and be churned out once that load subsided.  Containers have taken that dynamism and turned the dial up to 11. We find that among Datadog’s customers containers are churning 9x or more times a given VM runs on them.

As far as who is adopting them, it’s fairly safe to say everyone. Our study dives into this in more detail, but we find that these are adopted by organizations both large and small.

Rabinovitch: Datadog has a SaaS provider of monitoring services for applications and infrastructure. As we studied Docker adoption among our customers, we were able to include anonymized data from a sample of over 10,000 companies, and 185 million containers in real-world use. This is the largest single data set on container and orchestrator adoption, which provides us with a unique vantage point on where the industry is today.

Linux.com: Who will benefit from learning about these patterns?

Rabinovitch: While container adoption has skyrocketed over the past few years, it is still early days for adoption and many of the best practices around deployment are still being learned.  As users look to adopt these new technologies, it is helpful to see how their peers and the industry as a whole are adopting them in order to help validate their own approaches.

Linux.com: Can you tell us some of what you have learned from your studies?

Rabinovitch: We published our last study on Docker Adoption in April 2017 and the bulk of our findings are available in it. As part of my session at OSS Summit, we will be releasing new updated facts and metrics for a study to be released around the same time.

Linux.com: What kind of technologies do you see getting adopted?

Rabinovitch: Anecdotally, we often hear about mostly stateless applications being in containers.  In our studies we’ve been surprised to regularly find that data-stores and stateful services such as Redis, Postgres, and MySQL are some of the most frequently deployed technologies across our customer base.

Microsoft and IBM: Here’s why we back Google in Oracle Java API copyright case