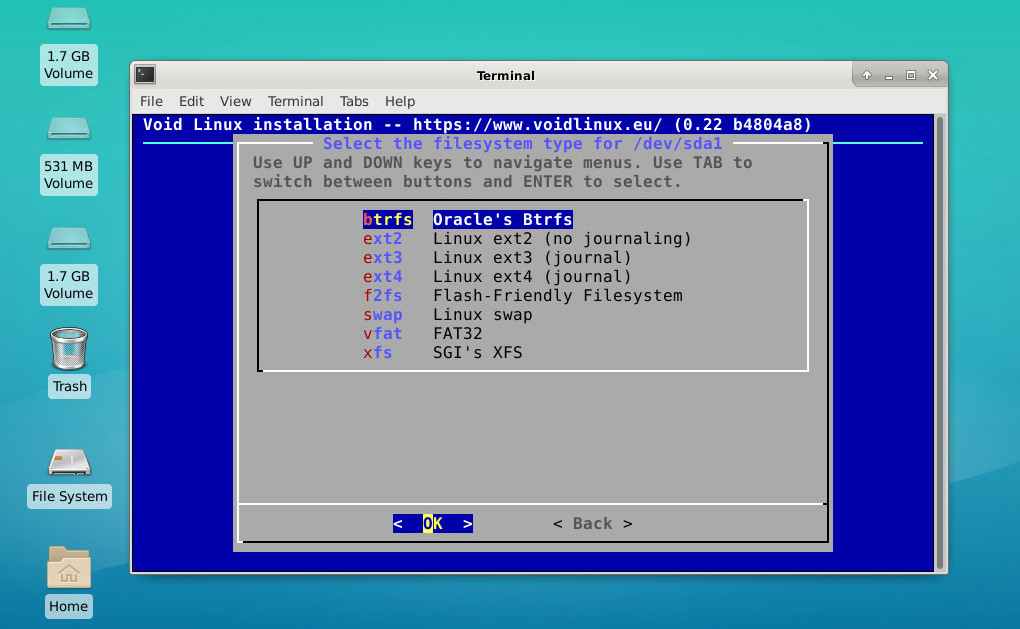 I’ve been using Linux for a very long time. Most days I’m incredibly pleased with where Linux is now, but every so often I wish to step into a time machine and remind myself where the open source platform came from. Of late, I’ve experimented with a few such distributions, but none have come as close as to what Linux once was than Void Linux.

Void Linux (created in 2008) is a rolling release, general purpose Linux distribution, available for Intel, ARM, and MIPS architectures. Void offers a few perks that will appeal to Linux purists:

Most of all, Void makes you feel like you’re using Linux of old (especially if you opt for the Xfce take on the desktop). With Void, you can opt to download a release with one of the following desktops:

You can also download a GUI-less version and install your desktop of choice.

With the exception of Cinnamon, the options are all focused on creating a very lightweight desktop. To that end, Void Linux will run very well on your hardware. I should make mention here that working with Void Linux in VirtualBox is an exercise in frustration. I use VirtualBox for all my testing purposes and Void does not play well with the VirtualBox ADDONS. Because of this, Void runs terribly slow in VirtualBox (even after following the Void Linux official instructions on successful host installation). With that warning in check, if you want to test Void Linux, install it on a desktop machine and save yourself an hour or two of hair pulling.

Regardless of what Void Linux desktop you opt to install, you’re going to get a taste of what it was like to install Linux “back in the day”. No it’s not a perfect recreation, but it’s close enough. So download Void Linux, with your desktop of choice, and get ready.

When you boot the live ISO image, you will find yourself on whatever desktop you’ve chosen. One thing you won’t find is a tried-and-true Install icon on the desktop, for simplified installation. Oh no. The installation of Void is handled through the terminal window, thanks to a lovely ncurses-based system.

Upon boot, you must open up a terminal window, su to the root user (the default root user password is voidlinux), and then issue the command void-installer. This will fire up the ncurses-based installer, where you must walk through the various installation steps (Figure 1).

You can use the arrow keys on your keyboard to move up and down and hit Enter to select a menu entry to configure. However, if you just hit Enter on the first entry, and then configure that option, you will automatically be moved down to the next step. Most of these steps are very intuitive. It’s not until you get to the Partitioning and Filesystems that you might find cause to raise an eyebrow. Of course, any user who remembers the process of installing Linux from the early days shouldn’t have a problem with these steps. But if you’re used to, say, the Ubuntu installer (that makes the installation of the platform as simple as installing an application), you might have trouble.

When you reach the partition section of the installation (Figure 2), you’ll want to tab down to New, hit Enter, and then define the size for the partition. Mark the partition bootable, tab to Write, and hit Enter (on your keyboard).

Once the partition is written, tab to Quit and hit Enter. In the filesystem section (Figure 3), you must first select a filesystem type and then specify the mount point.

Once you have your filesystem and mount point taken care of, you can then move down to Install and run the installer. This section will take about two minutes. When the installation completes, you can then reboot and enjoy your newly installed Void Linux distribution.

With Void Linux installed, you’ll find a fairly minimum set of tools available. Out of the box, there is no office suite, no email client, no image editor, not even a graphical package manager. What you have is a barebones desktop, with a nice command line installation tool, that allows you to install exactly what you want.

What many Linux faithful will appreciate the most about Void Linux is that it opts for runit, over systemd. The runit system is incredibly fast and easily configured. For example, where systemd requires complex run scripts, runit can start a process with a single line of code. That not only makes runit very easy to configure, but goes a long way to speeding up the process. For more information on runit, check out the official page.

If you don’t happen to like the desktops offered by Void, you can install, say, GNOME using the xbps-install command like so:

It just so happens, the version of GNOME available to the Void Linux repositories is 3.26, so you’re getting the latest greatest GNOME desktop. There are thousands of other applications you can install on Void. You can query the package manager like so:

Where PACKAGENAME is the name of the software you want to find.

Who should enter the Void?

I can’t say I’d recommend Void Linux to just anyone. In fact, I think it’s safe to say that new-to-Linux users need not apply. Out of the box, Void doesn’t really offer enough in the way of user-facing applications to appease the new crowd. And because there isn’t a GUI package manager, new users would find themselves frustrated very quickly.

However, if you’re wise to the ways of Linux (especially the command line), Void is a refreshing change from the same ol’ same ol’. Void offers just the right amount of old-school Linux to make you feel like you’ve traveled back in time, while still able to maintain enough modernity to remain current.