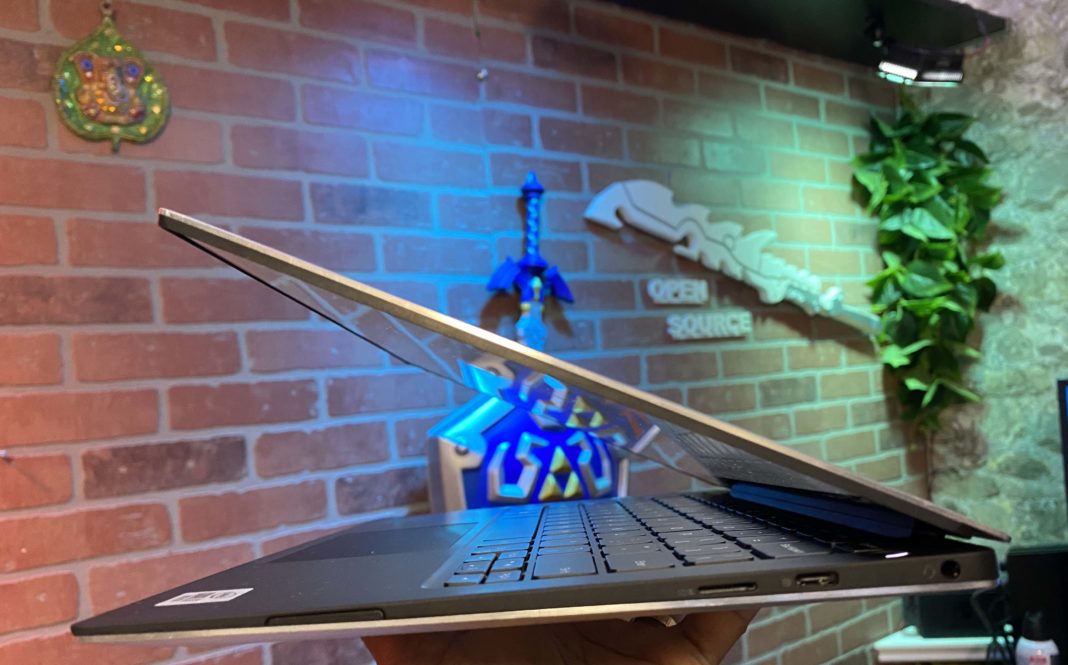 Gone are the days when we had to do a lot of research and read a lot of reviews to find a machine that would work with the least amount of trouble with the desktop Linux distribution of choice. Today, almost every machine out there can run Linux. The kernel community has done an incredible job with device driver support to make everything work out of the box.

Among these machines, XPS 13 is my favorite. While I need a really powerful desktop to handle my 4K UHD, multicam video production, I also need an ultra-portable laptop that I can bring with me anywhere without having to worry about a bulky backpack and charger. XPS 13 was also my very first laptop, which lasted me more than 7 years. So, yes, there is that nostalgic factor, too.

Dell updates the XPS line almost every year and the latest rollout was announced in October (link to video interview). XPS 13 (7390) is an incremental update to the series, and Dell was kind enough to send me a review unit.

It is powered by a 6-core, Core i7-10710U CPU. It comes with 16GB of memory and 1TB SSD. At the base frequency of 1.10 GHz, which can boost to 4.1 GHz, this is a great machine for average workloads. It doesn’t have any dedicated GPU, so it’s not meant for gaming or compiling from source for Gentoo Linux or Arch Linux. However, I did manage to run some Steam games on it.

If you are looking to run your Kubernetes clusters, AI frameworks or Virtual Reality, then there are more powerful machines from the Precision line, which are certified to run Red Hat Enterprise Linux and Ubuntu.

It has three ports, two of which are USB-C Thunderbolt 3, which can be used to connect to 4K monitors, USB accessories, and high-speed data transfer between machines with peer-to-peer networking.

It also has a microSD slot. As a video journalist, a slot for an SD card would have been more useful. Heavy users of Raspberry Pis would also love this card.

It has 4 microphones and an improved camera, which is now located at the top (goodbye, nosecam!).

XPS 13 (7390) is sleek and slim. At 2.7 lbs, it is certainly comparable to Apple’s MacBook Air. This machine is meant to be your travel companion and for everyday tasks like checking emails, browsing the web, and writing.

Its 4K UHD screen supports HDR, which means you will be able to enjoy Mandalorian in all its full glory. That said, the on-board speakers are not that great and sound muffled. They are OK for video chats or casual YouTube viewing, but if you want to enjoy the The Witcher later this year, or if you want to enjoy music from Amazon, Apple Music or YouTube Music, you need headphones or external speakers.

But how much fun can you get out of this machine before you reach for charging cable? It gave me around 7-8 hours of battery life with average workload: browsing the web with a few tabs, just watching a movie or listening to music. Multi-tasking, especially any kind of web activity, will drain the battery. Some fine-tuning on Linux may give you even more life. On Windows 10, I was able to get more than 10 hours!

As a video journalist who is still doing a fair amount of writing, I really like the keyboard. However, the trackpad is the same story that we have been hearing on desktop Linux for ages: it’s nowhere near the quality on MacBook or Windows machines. Maybe one day. To Dell’s credit, they do release drivers for the trackpad that enhances the experience, but I am not running the stock Ubuntu 18.04 LTS that came with this system. I did a fresh install of Ubuntu 19.10 because Gnome is painfully slow in 18.04. I tried openSUSE Tumbleweed, Zorin OS, elementary OS, Fedora, KDE’s neon and Arch Linux. All worked, although some needed extra effort to run.

So, who is this system for? It’s certainly for professionals who want a well designed, high-end machine from a brand they can trust. It’s for those who like a MacBook Air, but prefer the desktop Linux ecosystem. It’s for those who want to use Linux for work, instead of working on it to make it work.

Spending a week with this machine reinforced why I love Dell’s XPS series so much. They are the best Linux laptops out there. And this XPS 13 (7390) packs a punch.

10 ways to integrate event-driven automation into IT operations

5 great Perl scripts to keep in your sysadmin toolbox