In a previous article, we introduced a procedure for developing an image recognition flow using Node-RED and TensorFlow.js. Now, let’s apply those learnings from what we have done and develop an e-mail alert system that uses a surveillance camera together with image recognition. As shown in the following image, we will create a flow that automatically sends an email alert when a suspicious person is captured within a surveillance camera frame.

If a person is detected by image recognition, an alert mail with the image file attached will be sent using the SendGrid node.  Since it is difficult to set up a real surveillance camera, we will use a sample image sent by a surveillance camera in Kanagawa Prefecture of Japan  to check the amount of water in the river.

We will explain the procedure for creating this flow in the following sections. For the Node-RED environment, use your local PC, a Raspberry Pi, or a cloud-based deployment.

Click the hamburger menu on the top right of the Node-RED flow editor, go to “Manage palette” -> “Palette” tab -> “Install” tab, and install the following nodes.

First, create a flow that acquires the image binary data from the webserver. As in the flow below, place an inject node (the name will be changed to “timestamp” when placed in the workspace), http request node, and image preview node, and connect them with wires in the user interface. 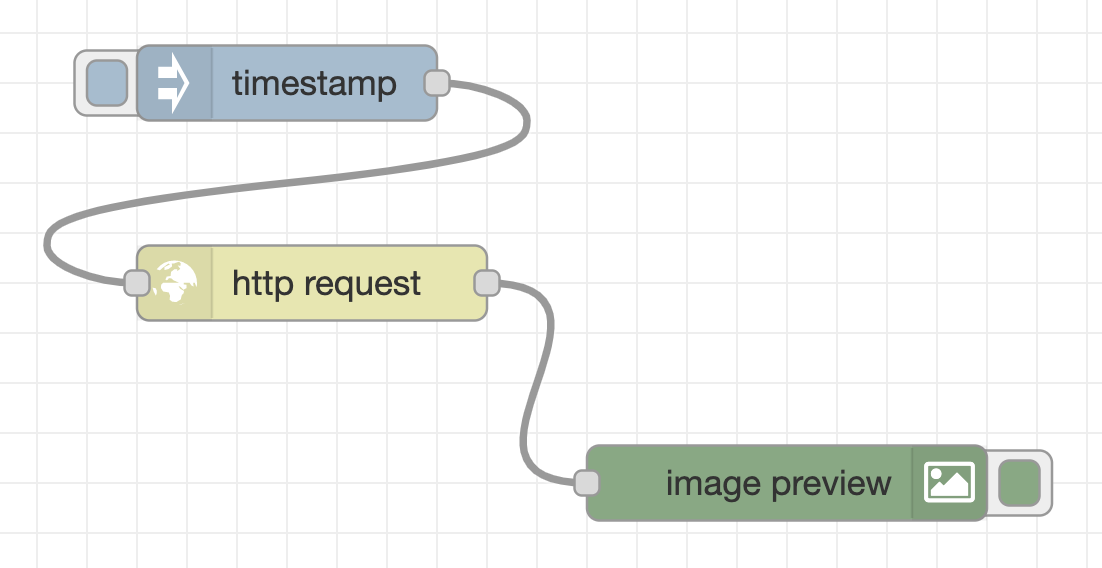 Then double-click the http request node to change the node property settings.

Paste the URL of the surveillance camera image to the URL on the property setting screen of the http request node. (In Google Chrome, when you right-click on the image and select “Copy image address” from the menu, the URL of the image is copied to the clipboard.) Also, select “a binary buffer” as the output format. 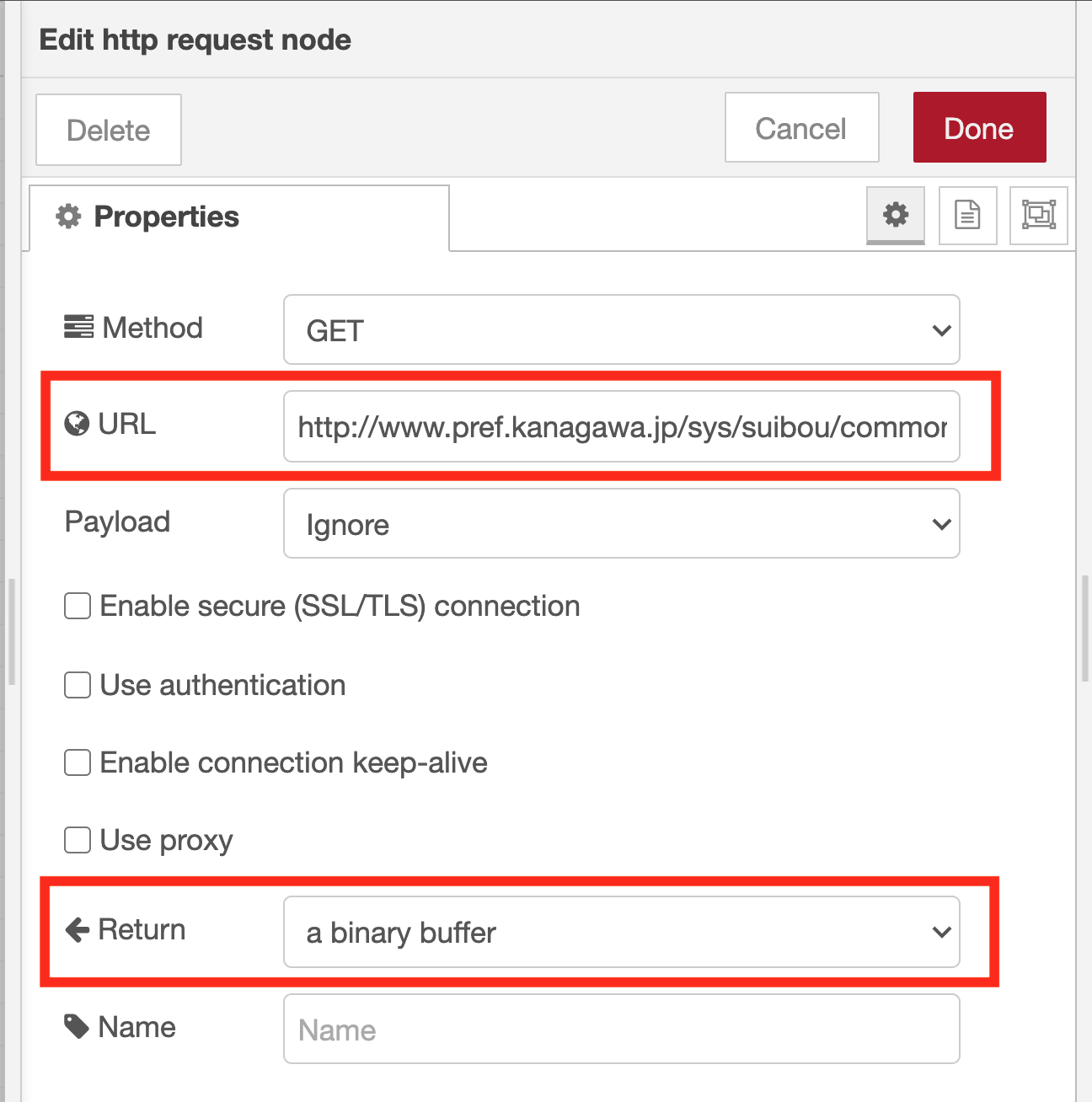 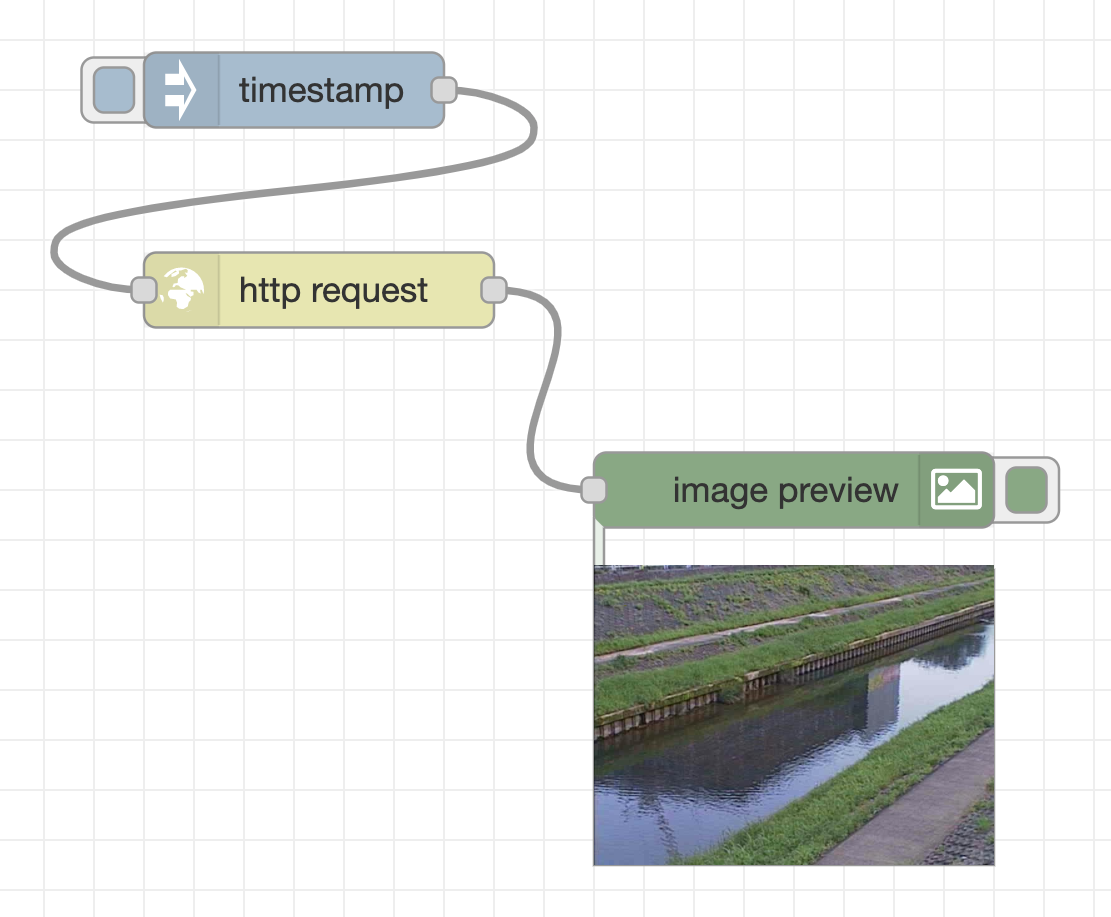 An image of the river taken by the surveillance camera is displayed in the lower right.

Create a flow for image recognition of the acquired image data

Next, create a flow that analyzes what is in the acquired image. Place a cocossd node, a debug node (the name will be changed to msg.payload when you place it), and a second image preview node.

To make this flow work as intended, you need to double-click the image preview node used to display the image and change the node property settings.

By default, the image preview node displays the image data stored in the variable msg.payload. Here, change this default variable to msg.annotatedInput. 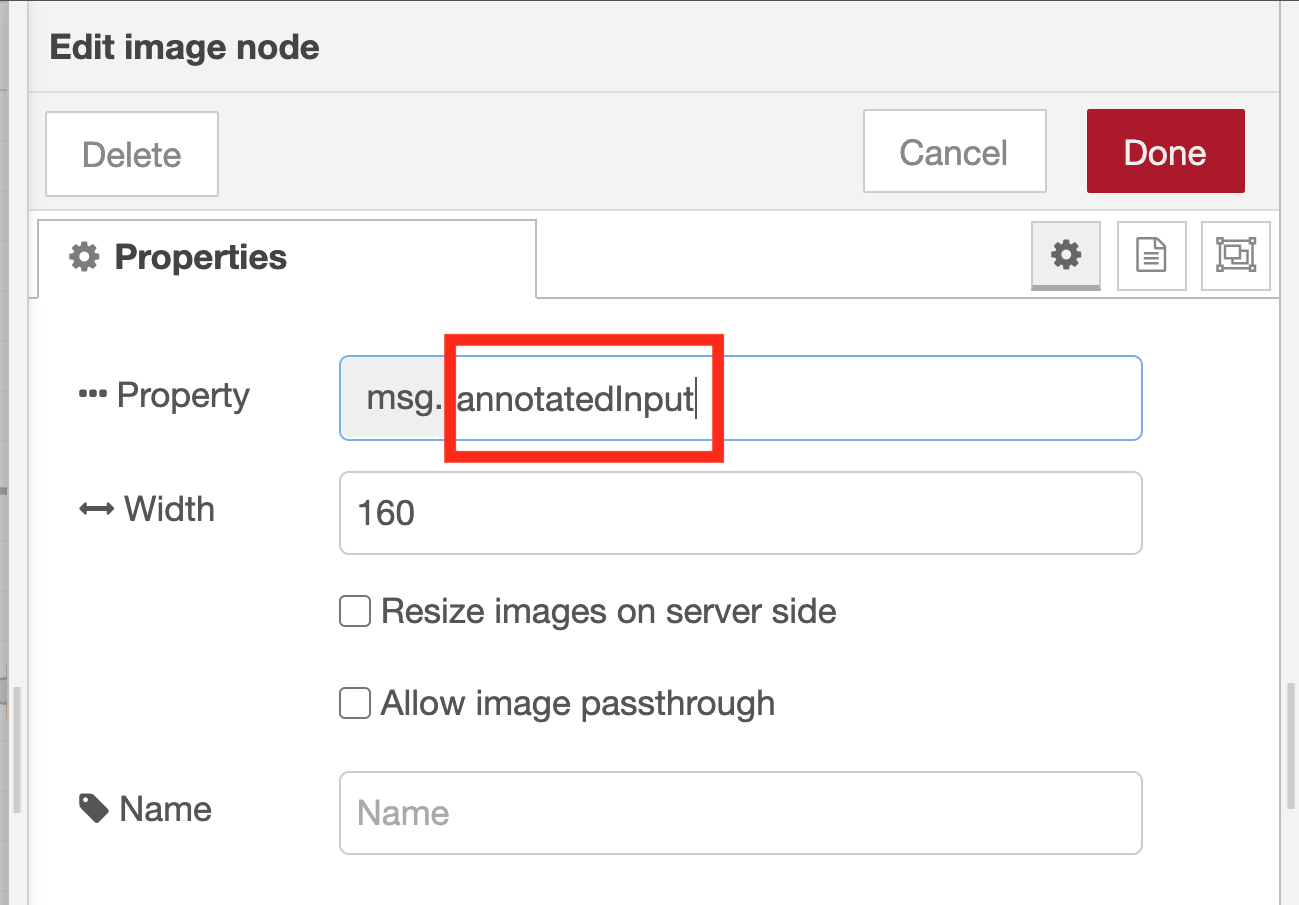 Since the flow is run regularly every minute, the inject node’s property needs to be changed. In the Repeat pull-down menu, select “interval” and set “1 minute” as the time interval. Also, since we want to start the periodic run process immediately after pressing the Deploy button, select the checkbox on the left side of “inject once after 0.1 seconds”. 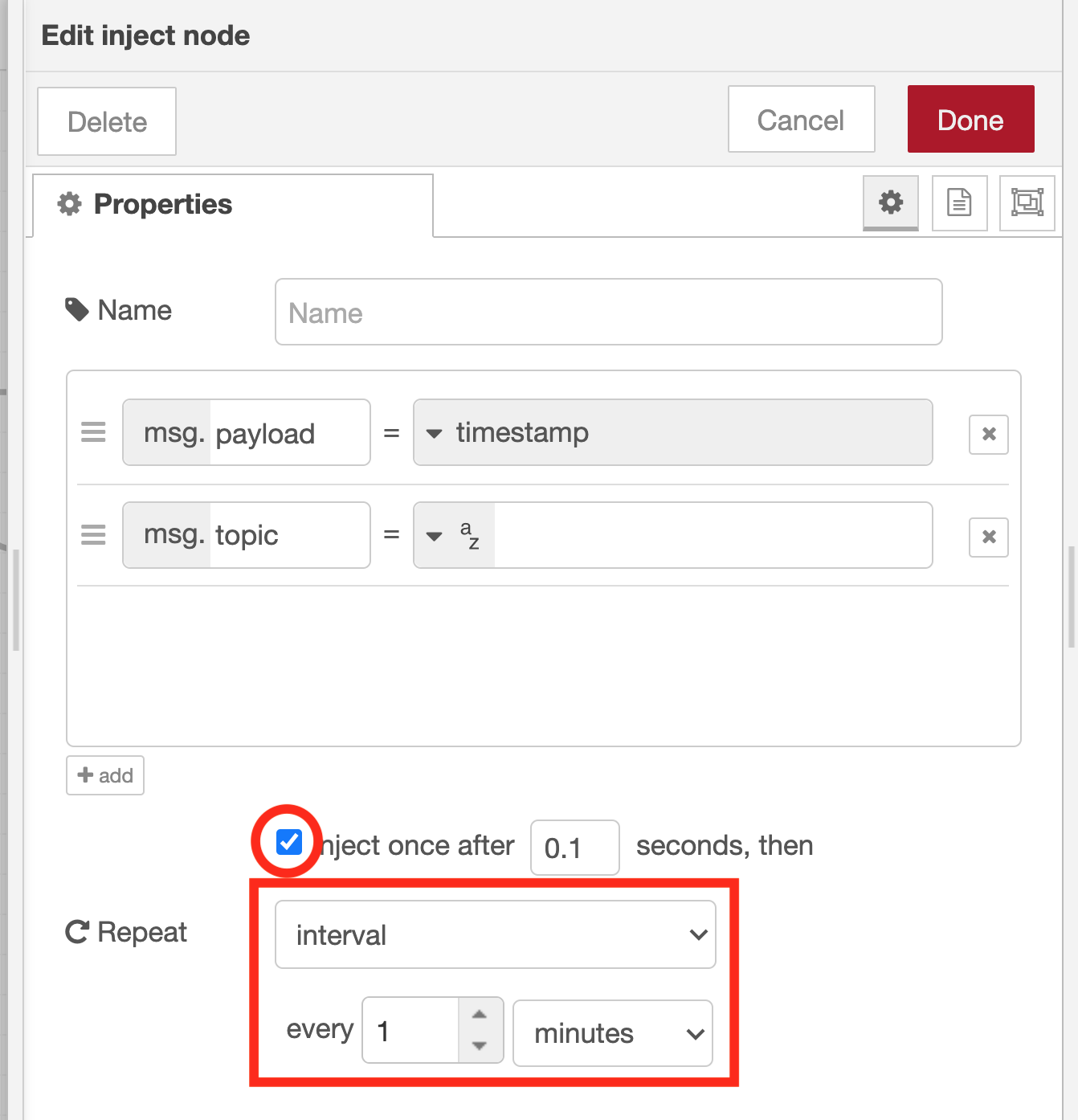 Run the flow for image recognition

The flow process will be run immediately after pressing the Deploy button. When the person (author) is shown on the surveillance camera, the image recognition result “person” is displayed in the debug tab on the right. Also, below the image preview node, you will see the image annotated with an orange square.

Finally, create a flow to send the annotated image by email when the object name in the image recognition result is “person”. As a subsequent node of the cocossd node, place a switch node that performs condition determination, a change node that assigns values, and a sendgrid node that sends an email, and connect each node with a wire.

Then, change the property settings for each node, as detailed in the sections below.

Set the rule to execute the subsequent flow only if msg.payload contains the string “person”

To set that rule, enter “person” in the comparison string for the condition “==” (on the right side of the “az” UX element in the property settings dialog for the switch node). 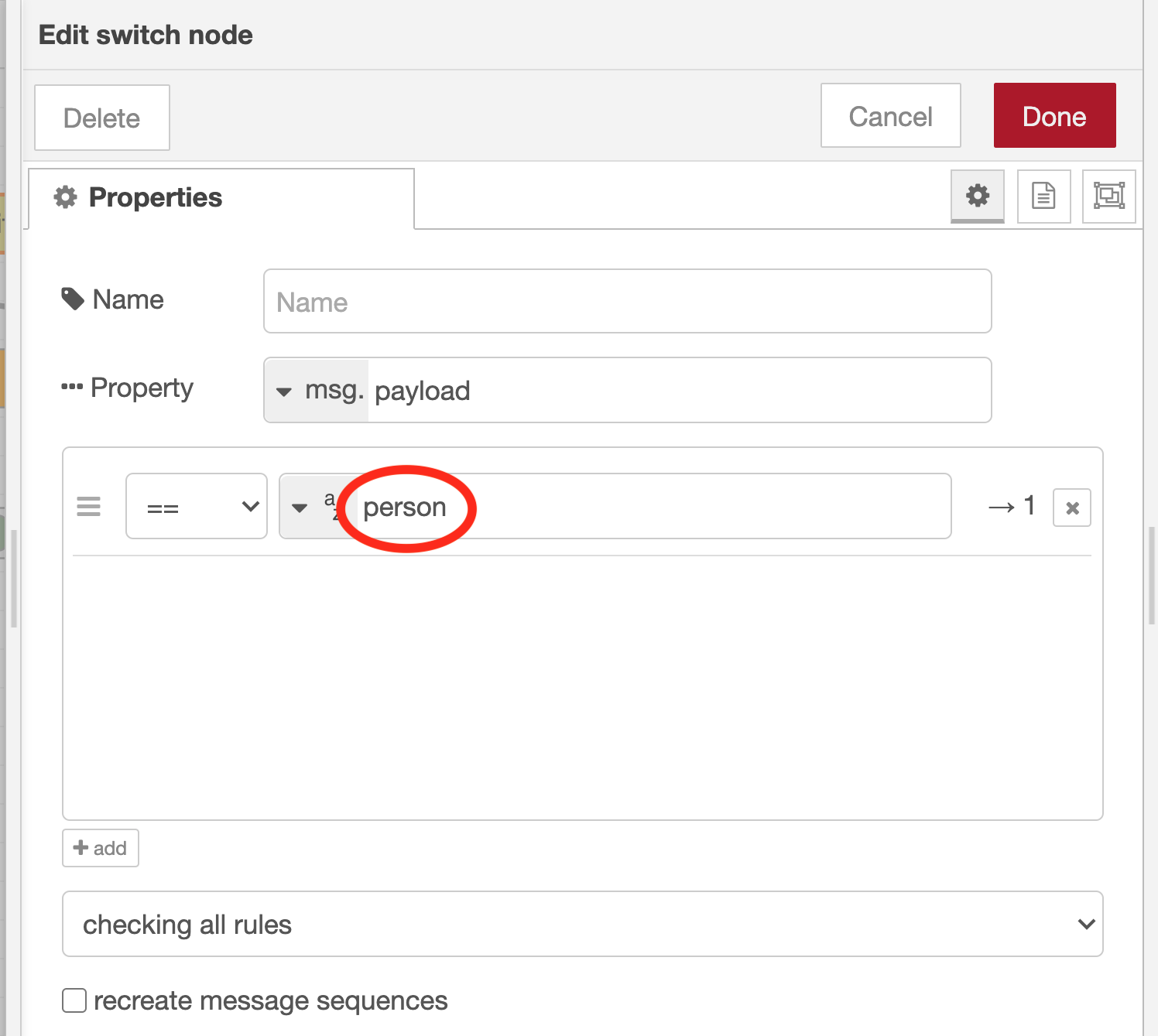 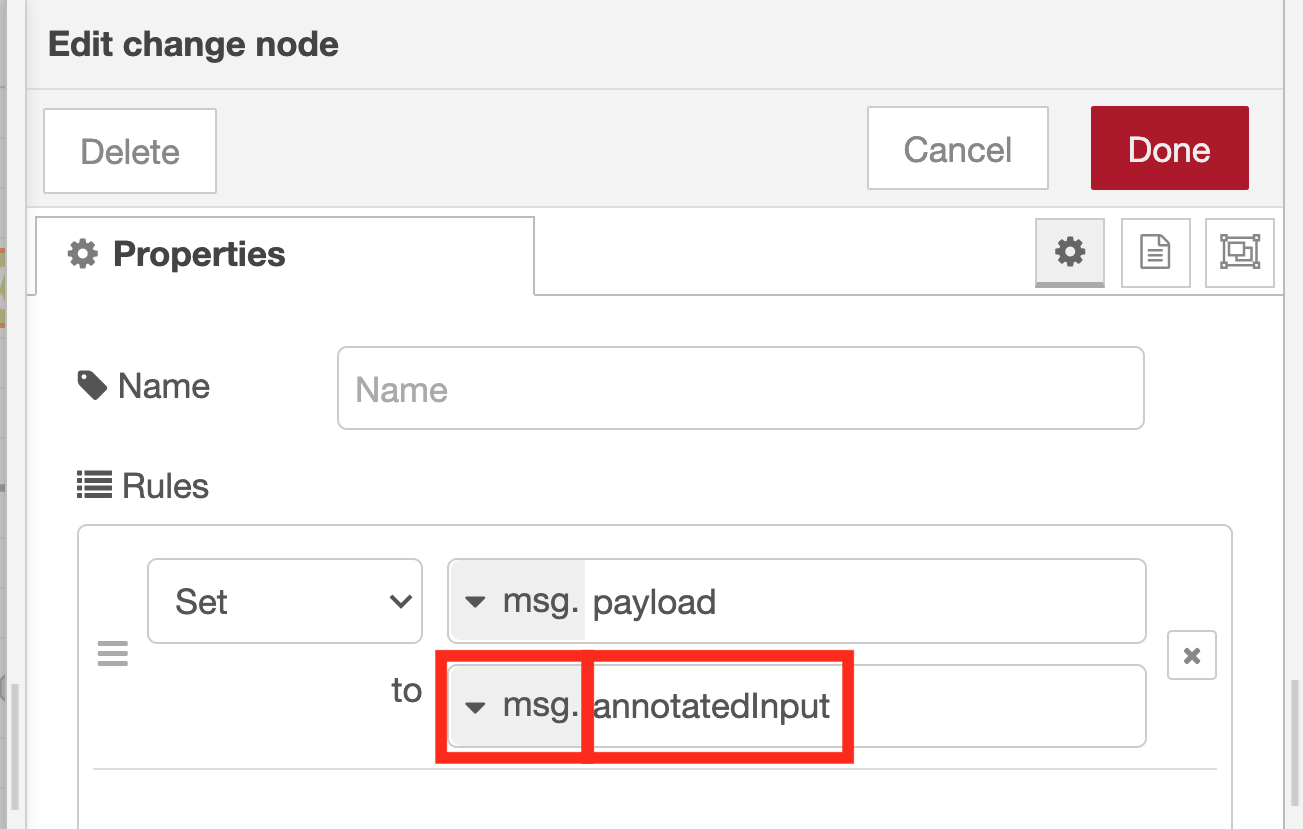 If you forget to change to “msg.” in the pull-down menu that appears when you click “az”, the flow often does not work well, so check again to be sure that it is set to “msg.”.

Set the API key from the SendGrid management screen. And then input the sender email address and recipient email address. 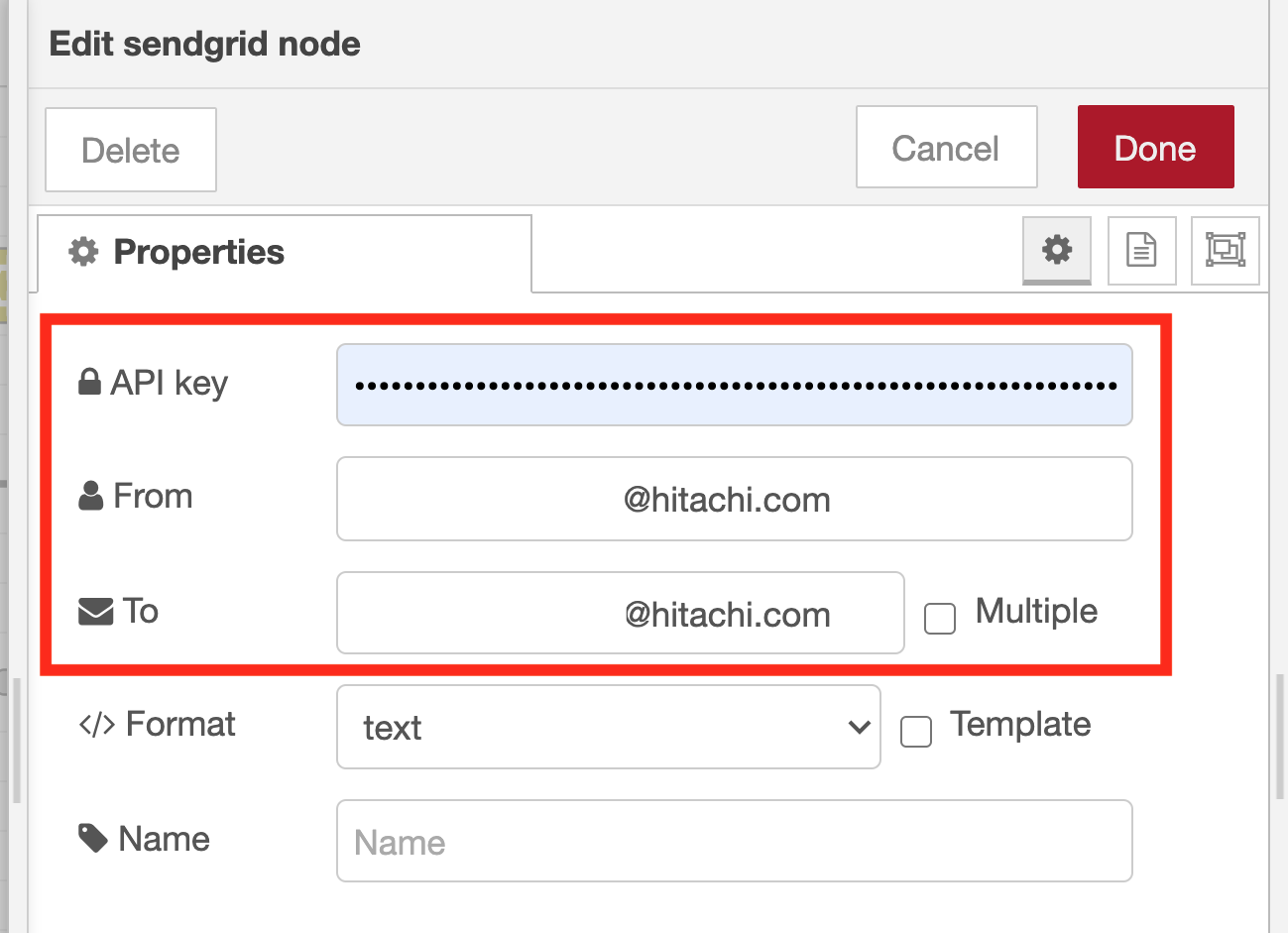 Finally, to make it easier to see what each node is doing, open each node’s node properties, and set the appropriate name.

After that, if the judgment process, the substitution process, and the email transmission process works as designed, you will receive an email with the image file with the annotation attached to your smartphone as follows: 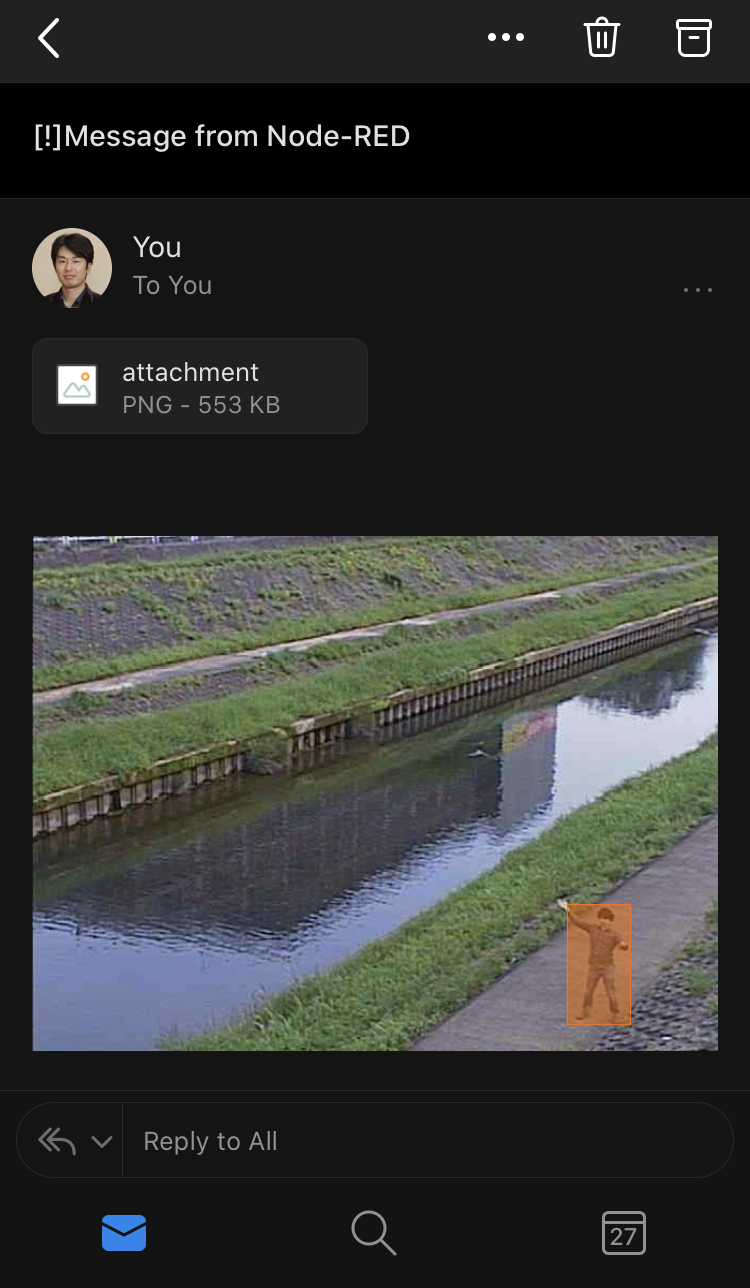 By using the flow created in this article, you can also build a simple security system for your own garden using a camera connected to a Raspberry Pi. At a larger scale, image recognition can also be run on image data acquired using network cameras that support protocols such as ONVIF.

About the author: Kazuhito Yokoi is an Engineer at Hitachi’s OSS Solution Center, located in Yokohama, Japan.