Home Training and Tutorials Installing Ubuntu 9.04 on a IBM X41 tablet
Facebook
Twitter
Pinterest
WhatsApp
Linkedin
ReddIt
Email
First, I must thank those on the Internet who have helped me with their work:
Thinkwiki has been a tremendous resource for me- both with my old X30 and the new X41 Tablet. In addition to Thinkwiki, several blogs have been helpful in helping me configure the various features of the X41 tablet. This blog post from the “Words are all Lies” blog was very helpful. Through this post, I was also able to find a link to LIKEN Apuntes, who has a very nice HOWTO for Ubuntu 8.04.

Since the X41 tablet lacks an optical drive, and I do not own the Ultrabay media slice, I decided to install from an external DVD drive (I bought it at Computer Geeks) instead of converting the image to a USB flash drive. There weren’t any issues with booting from an external drive, and the install was quick and painless. The auto-recognition of Wacom tablets in 9.04 rocks, since the X41 tablet uses a Wacom system. I’ll write more about that later.
My tablet doesn’t have a fingerprint reader, so I didn’t worry about setting that up.
I added cellwriter and xournal via synaptic. Cellwriter is a very nice program, but keep in mind that you will have to spend some time calibrating the software, as the program learns to recognize YOUR handwriting instead of a random person’s handwriting. This is nice, since my handwriting is atrocious, but relatively consistent.

Easy screen rotation is very important to a tablet PC, and luckily, most of the heavy lifting has already been done here.
LIKEN Apuntes rocks here by providing a tablet rotation script called rotatetablet (it was based on a script by Saikat Guha).
It is as follows:

Note that this script can be used without any arguments to rotate the screen 90 degrees to the right, but can also be used with the arguments [left|right|inverted|normal] to skip to a particular screen orientation.

I saved this script to /usr/bin/rotatetablet and made the file executable:

I then added two custom launchers to my top gnome panel. One launcher rotates to the right, the other returns the orientation to normal.

Here’s how I added them: 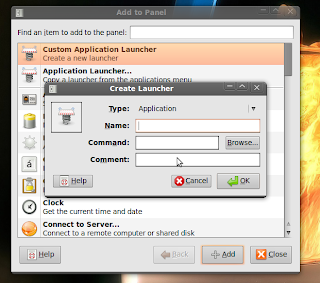 OK. Now screen rotation is taken care of, but the tablet input won’t rotate with your screen rotation, at least not yet. This can be fixed, though. Keep in mind that this fix is borrowed from words are lies (who, in turn, borrowed it from the ubuntu forums).

Type in the terminal:

and paste in these lines:


Save it, close it, and run these two commands in terminal:

After you’ve done that, restart. Everything should work just fine once you’ve restarted.

I couldn’t find any simple “rotate” icons, so I created a small series of SVG (scalable vector graphics) icons that do an adequate job for me. They are located at gnome-look.org. A link to the icons is here.

Concerning the Tablet hardware buttons, I’d like to give Thinkwiki the credit for mapping all of these buttons already. Nonetheless, I’ve had a small amount of trouble getting them going.
The first set of hardware keys I don’t have issues with at all. I wanted to map PageUp, PageDown, Esc, and Enter to the actual PageUp, PageDown, Esc, and Enter keys. This was easy.
Using gedit or your favorite text editor, open /etc/rc.local
($ sudo gedit /etc/rc.local) and add these lines:

OK, so far, so good. However, my attempts to map the remaining two buttons (a button that has an icon that looks like a toolbox, and a rotation button) have been less successful.

Words are lies suggests binding the remaining hardware buttons to (nonexistent) keys 130, 131, and 132. Keymaps usually end at 120 or so, but have room for more codes-it goes from 0 to 255.
This didn’t work well for me, so I decided to modify my approach. First of all, I don’t have a button that says Ctrl-Alt-Del. I think they are referring to the power button as the Ctrl-Alt-Del key. I took a picture of the hardware buttons in question, as I haven’t really seen a close-up picture on the net yet. Here it is:

My goal for the two unassigned buttons would be to have the toolbox button link to cellwriter and the rotate button link to /usr/bin/rotatetablet. Since I wasn’t having much luck assigning the keys to arbitrary keycodes, I decided to map them to keys that I don’t use- Scroll Lock and Pause. I found the keycodes for these keys by typing “sudo dumpkeys | less” and looking for the keycodes for Scroll Lock and Pause. On my laptop, those keys are 70 and 119, respectively. I bind these hardware buttons by updating my /etc/rc.local file to reflect this information:


I then created keyboard shortcuts for the two commands in gnome. In Ubuntu, Click System –> Preferences –> Keyboard Shortcuts, then click add to add a Custom Shortcut, as the following picture shows. Simply need name the shortcut and provide a path to the command. 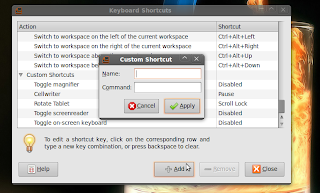 After that, click the Shortcut field, and assign the button that you wish to use. I have often used this Shortcut field to test that my hardware buttons were mapped to the correct keyboard button, as well.
I’ve gotten this to work, but I haven’t gotten it to work reliably, so I tend to use the icon shortcuts instead.

The volume buttons worked automatically, but they are linked to the hardware volume, and do not show on the On Screen Display. If you notice that you don’t have any sound, try pushing the Volume Up button, and you should be able to hear sounds again. I haven’t thought of any uses for the “Access IBM” button, so I have left it alone.

Overall, I’m very happy with the Thinkpad X41 tablet. I’ve enjoyed the tablet functionality, as I’ve never owned a tablet before purchasing this one. Some of the tablet buttons have been frustrating, but they haven’t been a deal-breaker for me.

Here are screenshots of the X41 in tablet and landscape modes: 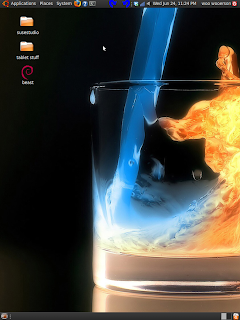 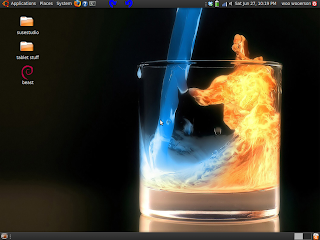