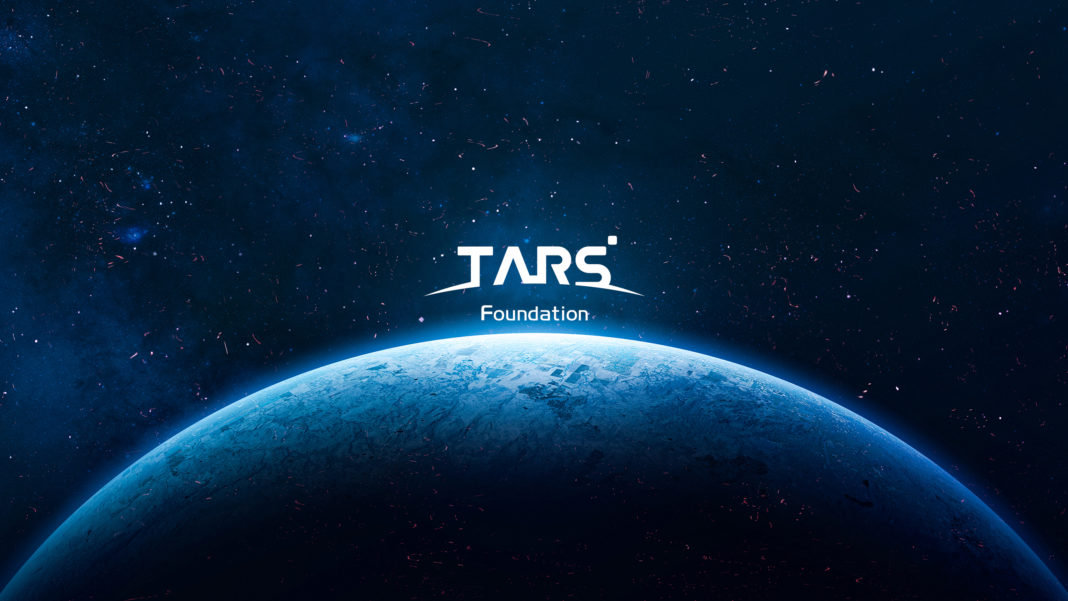 During the 1960s and 1970’s, software developers typically used monolithic architectures on mainframes and minicomputers for software development, and no single application was able to satisfy the needs of most end-users. Vertical industries used software with a smaller code footprint with simpler interfaces to other applications, and scalability was not a priority at the time.

With the rise and development of the Internet, developers gradually separated the service layer from these monolithic architectures, followed by RPC and then Client/Server.

But existing architectures were unable to keep up with the needs of larger enterprises and exploding data traffic. Beginning in the middle of the 1990s, distributed architectures began to rise in popularity, with service-oriented architectures (known as SOA) becoming increasingly dominant.

In the mid-2000s, microservices began to appear, and a set of popular frameworks based on microservice architectures were developed, with TARS appearing in 2008. After being used at scale and enhanced for 10 years, TARS became a Linux Foundation project in 2018. 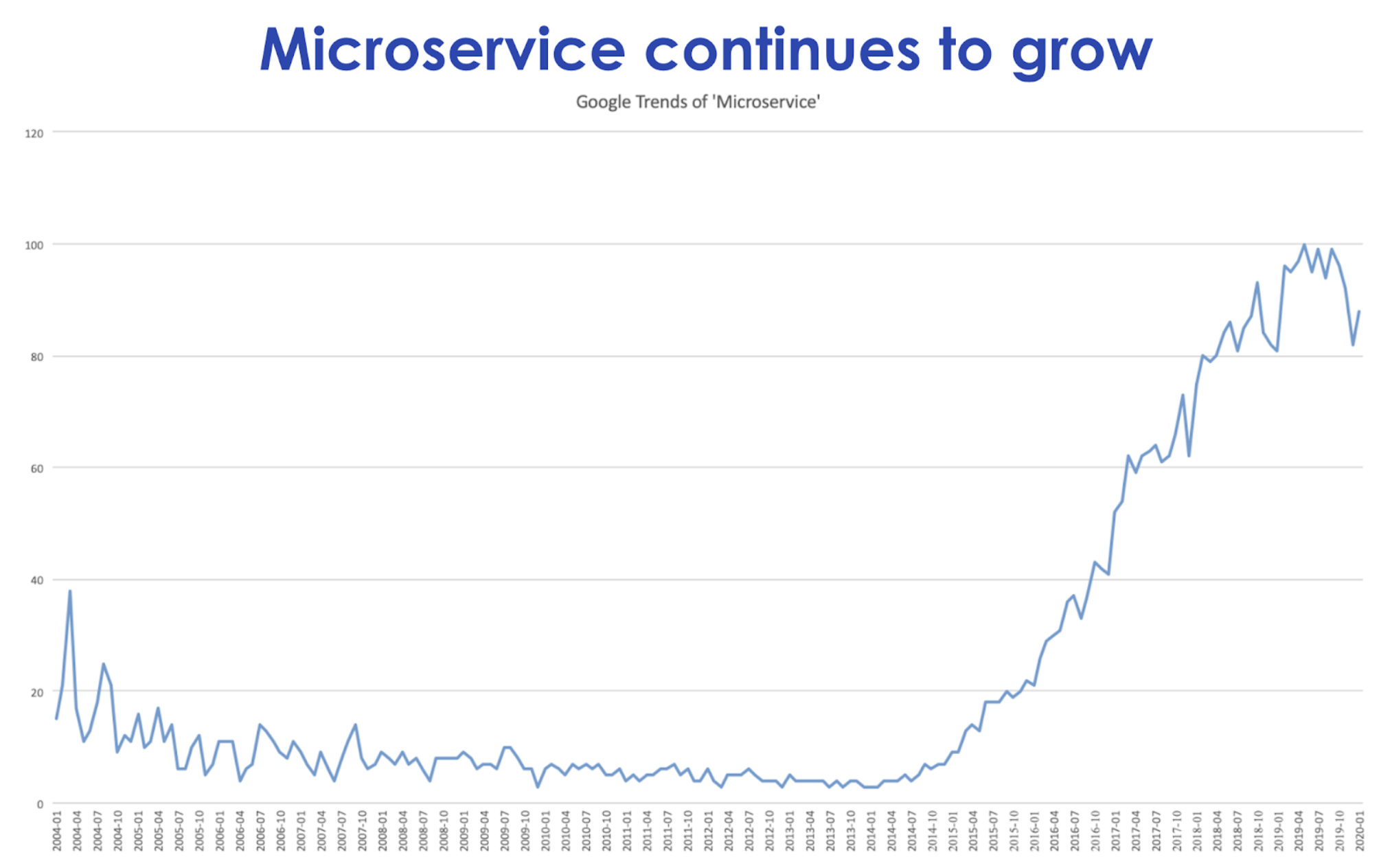 Figure 1. Interest in microservices has grown exponentially, as demonstrated by search trends on Google.

The TARS Foundation is a nonprofit foundation that focuses on open source technology that helps businesses embrace microservices architecture as they innovate into new areas and scale their applications.

It will continue to support the TARS project by growing the community that has been operating under the Linux Foundation since 2018. The Linux Foundation offers a neutral home for infrastructure, open governance, and community engagement support, aiding open source microservices projects to empower any industry to turn ideas into applications at scale quickly.

The TARS Foundation is working on addressing the problems that may occur in using microservices, including reducing the difficulties of development and service governance. It seeks to solve multi-programming language interoperability, data transfer issues, consistency of data storage, and ensuring high performance while supporting massive requests.

The TARS Foundation wishes to accommodate a variety of bottom-up content to build a better microservice ecosystem. It will include but will not be limited to, infrastructure, storage, development framework, service governance, DevOps, and applications based on any programming languages.

It Begins With a Mature Microservice Framework

In support of these growing requirements, the TARS project provides a mature, high-performance RPC framework that supports multiple programming languages developed by Tencent (0700.HK). Since the initial open source contribution by Tencent, many other organizations have made significant contributions to extending the platform’s features and value. 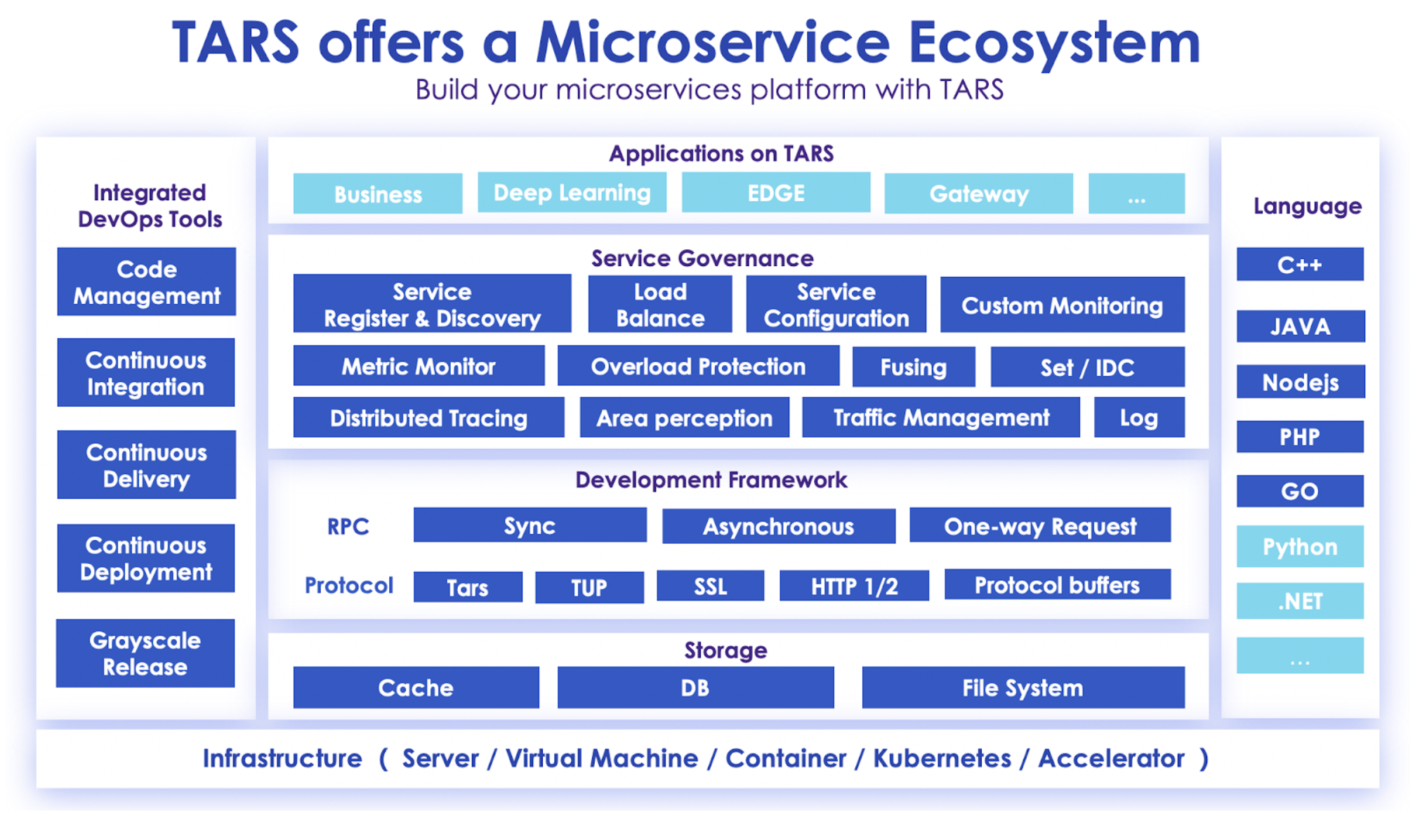 TARS can quickly build systems and automatically generate code, taking into account ease of use and high performance. At the same time, TARS supports multiple programming languages, including C++, Golang, Java, Node.js, PHP, and Python. TARS can help developers and enterprises to quickly build their own stable and reliable distributed applications in a microservices manner, in order to focus on business logic to effectively improve operational efficiency.

The advantages of multi-language support, agile research and development, high availability, and efficient operation make TARS an enterprise-grade product out of the box. TARS has been used and refined in Tencent for the past ten years and has been widely used in Tencent’s QQ and WeChat social network, financial services, edge computing, automotive, video, online games, maps, application market and security, and other hundreds of core businesses. The scale of microservices has reached over one million nodes, perfecting the practice of the industry-standard DevOps philosophy and Tencent’s mass service approach.

Why Should Projects Choose The TARS Foundation?

Joining the TARS Foundation will provide member organizations and projects with the following benefits:

As the TARS Foundation has been created to develop and foster the open microservices ecosystem, it will establish different functional mailing lists to support its user communities.

The TARS Foundation will also establish a series of mechanisms for the incubation and development of new projects. After a project has agreed to join the Foundation, the appropriate incubation and maturation route will be tailored according to the project circumstances.

After meeting all incubation requirements, the TARS Foundation will announce the project’s graduation. In addition to providing a technical oversight committee and a user community, the governing board will look after these projects by reviewing each project’s unique situation, providing strategic decisions, and assisting with their overall development.

Partner Commitments to the TARS Foundation

The TARS Foundation aims to empower any industry vertical to realize their ideas with their implementation of microservices. To date, TARS has worked with many industries, including fintech, e-sports, edge computing, online video, e-commerce, and education, among others.

As a result of over a decade of industry leadership in developing open microservices projects, many companies from different industries, such as Arm, Tencent, AfterShip, Ampere, API7, Kong, and Zenlayer, have committed to and have joined The TARS Foundation as members and partners.

TARS has been developed, hardened, and enhanced within Tencent for more than ten years. It is widely used in Tencent’s QQ and WeChat social, video, e-Sports, maps, application market and security, and other hundreds of core businesses. The scale of microservices has reached over one million nodes, perfecting the practice of the industry-standard DevOps philosophy and Tencent’s mass service approach.

Arm is the world’s leading semiconductor intellectual property (IP) provider. Arm has been working with Tencent over the last year to undertake a complete port of TARS microservices to the Arm architecture. That porting effort is now complete and is available through the Akraino Blueprint ecosystem. The first two Arm deployments within Tencent are AR/VR and autonomous vehicle use cases for internal Tencent use.

“We believe microservices will be a new concept for our products, and the TARS Foundation can empower its usage.”

Ampere focuses on cloud-native hardware. As such, it needs to ensure that any software used on that hardware runs exceedingly well to meet the demands of their customers’ expectations.

“Microservices have become very popular for several years, so we think cooperation with the TARS Foundation and focusing on microservices will allow us to achieve our vision.”

API7 is an open source software startup company delivering a cloud-native microservices API gateway that aims to deliver the ultimate performance, security, open source, and scalable platform for all APIs and microservices. Compared with traditional API gateways, it has dynamic routing and plug-in hot loading, which is especially suitable for API management under a microservices-based system.

“We look forward to collaborating with the TARS Foundation members to drive microservices adoption and innovation across businesses of all industries.”

“Integration of microservices with edge computing is now widespread. We look forward to doing more research on that and with the TARS Foundation.”

The TARS Foundation can help make the microservices ecosystem more effective, building a more aligned community of contributors and supporters. As more technology-first companies deploy microservices in production, we expect the trend to extend to traditional industries that are transforming. We hope that more people and companies will participate in the TARS Foundation and welcome everyone to contribute to a better and more open microservice ecosystem.

“The TARS Foundation will accelerate innovation for the microservices ecosystem through an open governance model that allows for rapid and high-quality contributions and collaboration. The Linux Foundation is very happy to support this work and enable its growth.” — Jim Zemlin, Executive Director of the Linux Foundation

An Introduction to WebAssembly